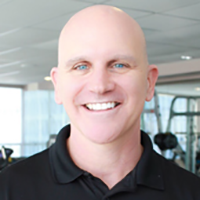 David Fabrizio, one of the most sought-after orthopedic/sports manual physical therapists in the Los Angeles area, is celebrating his 31st year in physical therapy and his 22nd year as founder of Fabrizio PTSM.

David’s patients—from A-list actors, studio heads, and Fortune 500 CEO’s to referrals from leading orthopedists—respond to his depth of knowledge of movement patterns and exercise physiology, manual physical therapy skills, compassion, warmth, and most of all, his humor.

David started his physical therapy and sports medicine career in the United States Air Force. He graduated Cum Laude from Cleveland State University with a Bachelor of Science in Physical Therapy. His training included internships at the top medical facilities in the Cleveland area, including an inpatient orthopedics rotation at the prestigious Cleveland Clinic Foundation. After graduating from CSU, he took a staff physical therapist position at the Great Lakes Regional Rehab Center. Here, he developed his treatment philosophy of functional and comprehensive physical therapy. He treated acute, cardiac, and neurological patients during day-time hours, while treating orthopedics and sports medicine patients in the evenings. David was selected as one of two physical therapists at Great Lakes qualified to teach Biomechanics, Ergonomics, and Back School. David has completed over 1,000 hours in athletic training rooms across the country treating both college and high school athletes.

A diversified athlete, David has competed in boxing, martial arts, triathlons, baseball, basketball, and football. This contributes to his diverse and in-depth understanding of kinesiology and abnormal movement patterns. He is a master weightlifter and is a Certified Strength Coach through the National Strength and Conditioning Association.

Along with his wife, Rachel, who runs the front office, David has brought his physical therapy clinic to the next level. David has five children and his hobbies include piano and acting.